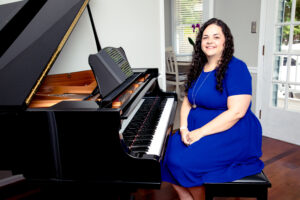 Anna Bunn originally from Zebulon, North Carolina has been a piano instructor at Snyder Music Academy since 2009. Anna currently lives in Fayetteville with her husband Timothy Parsons, her daughter and dog (she calls her pet dinosaur).

Anna graduated from The University of North Carolina at Pembroke with a bachelor’s degree in Music Education, minor in Sacred Music with emphasis on piano and organ. She went on to earn a Level 1 Mastership Certification in Music Learning Theory and has completed 36 hours towards a Master of Music in Music Theory from the University of South Carolina . While in her studies at these universities she participated in multiple ensembles to include percussion ensembles, steel drum band, concert band, university chorus and marching band.

She has taught in the public and private school systems. 2009-2012 Anna was the band director at Lakewood High School and Roseboro Salemburg Middle School. She was selected as Lakewood High School Teacher of the Year for the 2011-2012 academic year. Anna has also served as music teacher at Long Hill Elementary School (2012-2015), band teacher at Village Christian Academy (2015-2017). In addition to teaching, Anna has served as organist at several area churches including Parkton Baptist Church and Divine Street Methodist in Dunn.

At Snyder Music Academy, Anna has been a group piano teacher and private piano teacher to many students ages 3-88. Several students have moved on to major in music earning top scholarships. Anna specializes in teaching neurodiverse students with experience with students of all ability levels to include dyslexia, down syndrome, autism, and nonverbal.

Anna currently teaches music at Lake Rim Elementary School in Cumberland county and is a member of the Fayetteville Piano Teachers Association.